This is a re-upload of our first indie game, Operation Space Defense, or "OPSD" for fans who are interested in the original version, as we have just released Sierra Ops on Steam , which is the rebuild version.

The game is stable in Windows 7/XP, but in Windows 10, it may not run at all, we're not sure why, and can no longer debug the project. Please test it first before contributing.

You can also support the development of future episodes of Sierra Ops by purchasing the Season Pass on Steam.

Feel free to check out the development history of Sierra Ops on our website: http://innomenpro.com/

Set in the year SE 3256, the player is thrust into mankind's first interplanetary war between the Earth Alliance and the Ares Confederation.

As the promising captain of the experimental dreadnought prototype, codenamed Sierra. Your sole objective is to help turn the tides of the war, utilizing the ship's advanced combat systems, flexible energy allocation and optimized platform deployment capabilities.

To the captain, the core principles of prudence, guile, resource management and patience are essential to survival. The technology incorporated in Sierra allows it to explore multiple paths to victory: evade and assault enemy ships in classic broadside warfare; research armaments and upgrades to outgun the enemy fleet; or outnumber them with remotely-controlled weapon platforms. Rout the enemy’s armada in order to quell the rebellion and save Earth from the corrupt colonials. 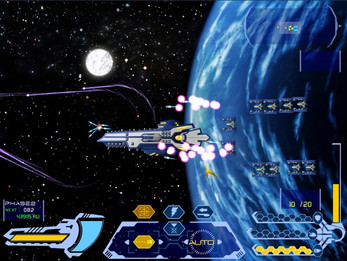